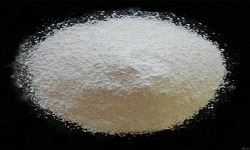 Sodium hydrosulfite, also known as sodium dithionite or hydros, has a formula of Na2S2O4. It is a white crystalline powder and exists in both the anhydrous and dehydrated forms. Sodium hydrosulfite has a powerful reducing capacity and allows vat dyes to be reduced readily at room temperatures. It can also be used as antioxidants in hair treatment processes.

Sodium hydrosulfite is stable when dry, but will slowly be oxidized by air. Even with the absence of air, it will be deteriorated and hence it cannot be kept for long and has a comparatively shorter shelf life. When sodium hydrosulfite is wet and in the absence of oxygen, it is unstable and will be decomposed to sodium thiosulfate and sodium bisulfite.

Sodium hydrosulfite is a versatile chemical and is used mainly in textile dyeing, manufacturing of pulp and paper, commercial bleaching agent, bleaching of foodstuffs and as a reducing agent in hair treatment.

Using sodium amalgam, formed in the manufacturing of chlorine using mercury cells at a controlled pH in the range of 5 to 7), it reduces sodium sulfite to sodium hydrosulfite. This method has an advantage and is one of the methods widely used today, as the end product does not contain any trace of zinc, iron or mercury.

Paper Industry
Sodium hydrosulfite is used in the bleaching of wood pulp. By reaction with formaldehyde, it produces rongalite that bleaches the wood pulp. This decreases the colour of the pulp so that it becomes whiter. This method is of high efficiency and is also known as reductive bleaching since reduction of the colour-causing compound causes it to lose its colour-causing property.

Other Applications
Being a reducing agent, sodium hydrosulfite is used an as antioxidant in hair treatment process since it scavenges for oxygen and have the ability to split disulfide bonds in hair. It is also used in the formulation of body and hand products, deodorants, hair dyes and colours. In addition, it aids in water treatment and the purification of gas. Moreover, Sodium hydrosulfite is used in the food industry and serves as a food additive. It is used in industrial dyeing processes. It is a water-soluble salt and can be used as a reducing agent, potently reducing water-insoluble dyes into water-soluble dyes. Meanwhile, it is also used in bleach, together with formaldehyde. In addition, it removes residual oxides and excess dye, improving the overall quality of the product. Sodium hydrosulfite is also used as commercial bleach for treatment of leather, kaolin clay, fur and chrome tanning.