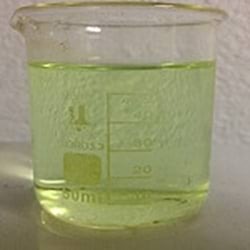 Sodium hypochlorite is a yellowish liquid with an odor and has a formula of NaClO. It was discovered in 1785 by French chemist Claude Louis Berthollet and was found to bleach cotton and remove stains from clothes at room temperature. To date, it serves as an active ingredient in bleach and is often used as a disinfectant and bleaching agent.

Sodium hypochlorite is unstable as chlorine evaporates at a relatively fast rate. It also disintegrates upon heating, contact with acids or sunlight, or poisonous and corrosive gases. When dissolved in water, it forms an aqueous alkali solution due to the presence of caustic soda and serves as a strong oxidator.

Today, the Hooker process is used to industrially produce sodium hypochlorite. Chlorine gas is passed into a dilute and cold solution of sodium hydroxide, and sodium hypochlorite is manufactured via electrolysis. By this process, chlorine gas is simultaneously oxidized and reduced and only a catalytic amount is required for the process. In addition, sodium chloride is produced as the main by-product.

Earlier in the 19th century, the chloralkali process was used to manufacture sodium hypochlorite industrially via electrolysis of brine. Sodium hydroxide and chlorine gas produced are mixed to form sodium hypochlorite. The Chloralkali process sets to replace the conventional method of passing chlorine gas through a solution of sodium carbonate, as well as the use of chlorinated lime with sodium carbonate, yielding chlorine that is in turn used to manufacture hypochlorite solutions.

Sodium hypochlorite is used mainly in textile dyeing and finishing. It is also used as a bleaching agent, serving as an alternative to sodium chlorite and hydrogen peroxide. It removes yellowish stains and spots that are not removed by the laundering process. Having de-staining properties, it is used for removal of stains from laundry and is particularly effective on cotton fiber. In addition, sodium hypochlorite serves as an oxidizing agent. It helps in the selective oxidation of starch in textile processing and finishing.

Sodium hypochlorite is now used in endodontics during root canal treatments. It is the medicament of choice due to its efficacy against pathogenic organisms and pulp digestion.

Sodium hypochlorite is used as a disinfectant in beer brewing. Having de-odorizing properties, it is often added to industrial wastewater to remove odor and used to neutralize sulfur hydrogen gas and ammonia. It is also used to reduce skin damage and treat moderate to severe eczema in humans.